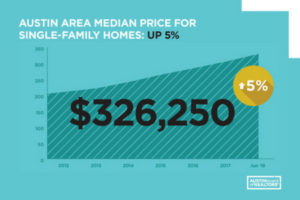 AUSTIN, TX– Single-family home sales in the Austin-Round Rock Metropolitan Statistical Area (MSA) experienced strong and steady growth in the first half of this year but declined in June 2018, according to the June & Midyear 2018 Central Texas Housing Market Report released today by the Austin Board of REALTORS®.

“Despite a decline in home sales volume across Central Texas in June, 2018 is on track to be another record-setting year for the region’s housing market,” Steve Crorey, 2018 president of the Austin Board of REALTORS®, said. “Consecutive years of record-breaking sales activity have set the bar incredibly high, and it’s important to remember that we’re comparing June 2018 figures to that strong activity. The Central Texas housing market remains strong and continues to move at a demanding pace.”

Thank you for contacting us, we'll get back to you shortly.

Sorry, we are unable to send your message at the moment. Please try again later.

Our website is under construction. We should be back shortly.
Thank you for your patience.
Are you the site owner?
Are you an mls provider?
© 2020 All Rights Reserved
Real Estate Websites by Placester